Blog Tour Stop including Excerpts, Reviews & Giveaway – No Filter and No Limits by Nora Phoenix 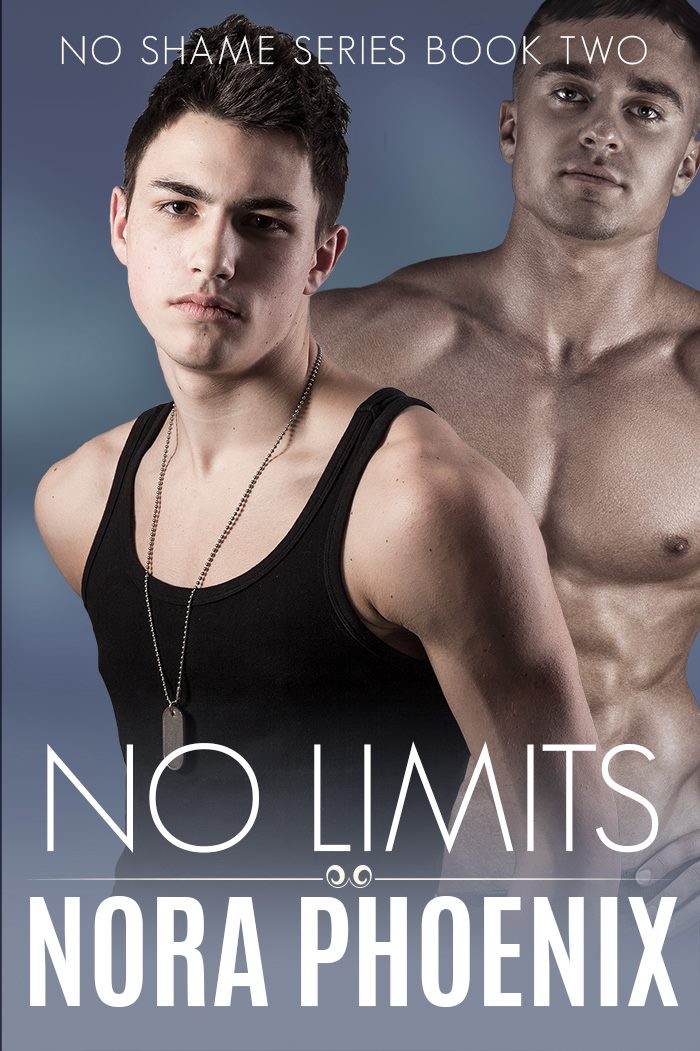 Josh is convinced he’ll never find someone who’ll love him the way he is. He’s not exactly a catch with his PTSD, which has transformed him into a homebody most of the times. Sweet, maybe, but also boring as hell. Plus, there’s that submissive tendency he recently discovered and is dying to explore. When Connor shows interest in him, he can’t believe the sexy cop would look at him twice, let alone make an effort to get to know him. When he does, Josh discovers they have more in common than he’d ever thought possible.

Connor had survived the ordeal that left his best friend and fellow Marine dead, but that survival came at a price. He’s a robot, going through the motions, but barely alive. Until fate intervenes when he meets Josh. The vulnerable man triggers all kinds of protective and dominant urges in Connor, but what would a cute guy like Josh want with an inexperienced, closed-off, bossy steamroller like him?

When Connor discovers his past endangers Indy, all hope for a future between him and Josh seems lost. After all, there’s no way Josh will ever choose Connor over Indy’s safety and Noah’s lifelong friendship. When a crisis hits, can Connor prove he’s strong enough to deal with everything that’s thrown his way?

Connor needed to know. “But you are gay, though?”

“That’s good,” Connor said, then cleared his throat. So far for playing it cool. Oh, fuck it, that ship sailed long ago. You might as well go all in. “Look, before we continue this conversation, can you at least say something?”

Josh tilted his head to the side, his nose crumpling, making him look adorably cute. “About what?”

Connor threw his hands up in the air. “About whether or not you like me back. You still haven’t said a damn thing on how you feel about me, if you like me or not.”

This time, Josh’s answer came wicked fast. “You’re hot and damn sexy, but I don’t know you well enough yet to decide whether I like you or not.”

Josh rolled his eyes. “Dude, you’re built like a tank, you’re as masculine as they come, you have the whole uniform thing going with a healthy dose of dominant macho and ‘don’t fuck with me’ thrown in. You’re, like, the wet dream of every bottom, including me.”

This brutally honest confession was not what Connor had expected from sweet, shy Josh. To be fair, the guy seemed a little flustered once the words were out, as if he’d said more than he’d wanted to. But holy fuck, those words had lit a fire inside of Connor.

“I’ve never done this before,” Connor said. “I’ve never been in a relationship, haven’t even dated, so I have no idea what I’m doing here, or how to do this.”

Understanding dawned in Josh’s eyes, taking away his previous embarrassment, which was exactly what Connor had intended. He had this baffling urge to make Josh feel better. “You’re not out,” Josh said.

This book picks up where book 1 left off and is NOT a standalone. As I suspected I would, I liked this book better than book 1…enough that I’ll stick with the series to find out what happens next.

I really liked Josh and Connor together. They suffered from the insta-love just like Indy and Noah did however theirs did seem a little more organic for a couple reasons 1) they knew each other a little longer having shared the robbery in book 1 and 2) they have a common bond in their desire to forge a D/s relationship which instantly tied them together. The way Connor handles Josh is damn perfect. They seamlessly fell into those roles which they both clearly needed and thrived on. Just like Noah and Josh, Connor is just surviving not really living. He doesn’t have much experience with relationships but he does so many things just right he will be good for all of them. Their future is looking pretty bright and I’m anxious to see that all play out.

Noah and Indy both do epically stupid things in this book – Indy because he’s running scared still and Noah because of a misguided sense of responsibility. I didn’t really understand Josh’s past coming up but maybe that’s setting the stage for something in the future.

We meet Josh’s brother, Aaron in this one as well. I don’t like him and he didn’t do much to change that. He’ll have to really go through some changing in book 3 to sway me.

The story is not completed for Indy so I’m assuming that will continue to play out in the next book. It appears Aaron will be one of the MC’s in that book and I guess we’ll have to wait and see how that will tie in to the Indy story.

Indy will do anything to prevent his mobster ex from finding him. Their last encounter left Indy recovering for months in the hospital, and ever since he’s become an expert at hiding in plain sight. Determined to stay under the radar, he takes on a new identity and moves from place to place. His life has no room for friendships, let alone love, so he keeps his heart firmly closed. After all, he has nothing to offer but a damaged body and a broken soul. Plus, he’s so done with men. Until he meets the man who breaks through all his defenses.

Former Army Medic Noah came back damaged from his last tour—in more than one way. Between supporting his best friend who’s struggling with PTSD, dealing with his own issues, and the stress of his job as a physician assistant, rebuilding his life seems impossible. There’s little time for what Noah needs, let alone for what he wants. When he meets Indy, Noah discovers what he wants more than anything: for Indy to stay.

Indy never expected the strong, confident Noah to be as damaged and broken as himself. But what will happen if he starts letting Noah in? Indy knows he should run to protect himself and Noah.

Noah needs Indy to stay more than anything. But will what little he has to offer be enough to make Indy trust him and stay?

No Filter is a steamy M/M romance that ends with a HFN, but with the promise of a HEA. It’s the first book in the No Shame Series, and is not a stand-alone novel. It contains hot sex, a hint of a ménage, lots of talk about hot sex, flashbacks of said hot sex, and…Oh well, you get the idea. Also: trigger warning for mentions of sexual abuse.

Dressed in a T-shirt and flannel PJ bottoms, Indy made his way downstairs. Autumn had started, setting the trees in the yard on fire in an explosion of red, orange, and yellow, and bringing cold nights, but downstairs it was comfortably warm. Noah was reading the paper in his usual spot, but Josh was nowhere to be seen.

“Morning,” Indy said, always a bit shy at first when it was only him and Noah.

“Hey. How are you feeling?” Noah never failed to ask Indy this, and it wasn’t a polite question.

Indy grabbed a bowl from the cabinet.

“Perfect. We’ll cut off your cast today. I didn’t think you’d want to do an official hospital visit for that, right?”

Indy shook his head, carefully cutting a banana on a cutting board with one hand and putting it in the bowl. He took yogurt from the fridge. “Not if I can avoid it.”

“Well, you’re lucky you have a highly skilled medical professional at your disposal, who’s willing to do a house visit.”

Indy grinned as he sprinkled crunchy granola on top of his yogurt. “Don’t know about the highly skilled part, but at least he’s free.”

“That hurt.” A smile tugged at the corners of Noah’s mouth. “My price just went up.”

“Double times nothing is still nothing, you do realize that?” Indy took a bite of his breakfast. He loved these verbal matches with Noah almost as much as not having to worry about what to eat for breakfast every day.

“Who says it was free to begin with? I only offered my skilled services, never said they were free.”

“So what’s your price?” Indy asked, expecting Noah to launch another joke.

“I want you for the entire day,” Noah said.

Indy frowned, quickly chewing to empty his mouth. “What do you mean?”

Noah reached out and circled Indy’s good wrist with his right hand, gently pulled until Indy was standing between his legs. “It’s my day off, and Josh has some special therapy session, so he’s gone all day. I want to spend the entire day with you, and you have to do exactly what I tell you.”

Honestly, the jury is still out on this series…it has potential but I have a few issues that can’t be overlooked.

I like the premise of Indy’s story. I like Noah and Josh. I liked how they met and even how Indy is brought into the mix. I can kind of get to the whole triangle-ish thing although I think it’s more confusing to everyone than helping. I’m probably in the minority when I say I prefer more story than sex but that is NOT what you get here. I don’t like using sex as a cure-all EVER. Noah and Josh are clearly unhealthily codependent and need to work through their issues some other way as what they are doing isn’t working…they are barely living. And there is A LOT of sex in this book. And INSTA-love which was totally unbelievable to me because they all have trust issues and histories that would definitely not allow for that.

There are unresolved issues and plotlines left at the end of the book which I’m hoping will be resolved in book 2. I am sticking with this at least through book 2 because I really like Josh and the potential for his relationship with Connor intrigues me. I also want to see what happens with Indy. Time will tell if book 3 makes it to my TBR list.

When she was a little tot, Nora’s mom got a library subscription for her. That, as they say, was that, and a lifelong love for books was born. Nora never stopped reading and doesn’t exaggerate when she says she devours books, rather than plain reads them. She started writing stories as soon as she could hold a pen, and wrote her first full book as a teen (on a typewriter!). It took her waaaay too long to follow her dream to become a romance author.

Nora writes M/M romance, because hello, sexy boys, and likes her men flawed, strong, and a tad broken. She appreciates a little kink, but insists on a happy ever after.