Two bands, one goal, and a second chance…

Everything is finally going well. I have a new band, a new label, and a debut album coming out. And then my drummer breaks his wrists. Just my luck. I need a quick replacement to record one more song, but my options are limited, and of course, the obvious candidate hates my guts. Okay, so I may have given him a few reasons over the years, but isn’t there an expiration date on holding a grudge?

I don’t trust Declan McNamara. Sure, he’s talented, smart, and has more sex appeal than any one person should be allowed. And yeah, he may be a rock star in the making, but beware—he’s trouble. However, our new record label’s survival may depend on a truce and extreme measures…of the fake boyfriend variety. If it’s our best shot at the big time, I’m willing to set the past aside and start over…here and now.

Starting From Here is a MM, bisexual romance rock and roll style…rival bands, fake boyfriends, and a second chance at a new love story. Each book in the Starting From series can be read as a stand-alone. 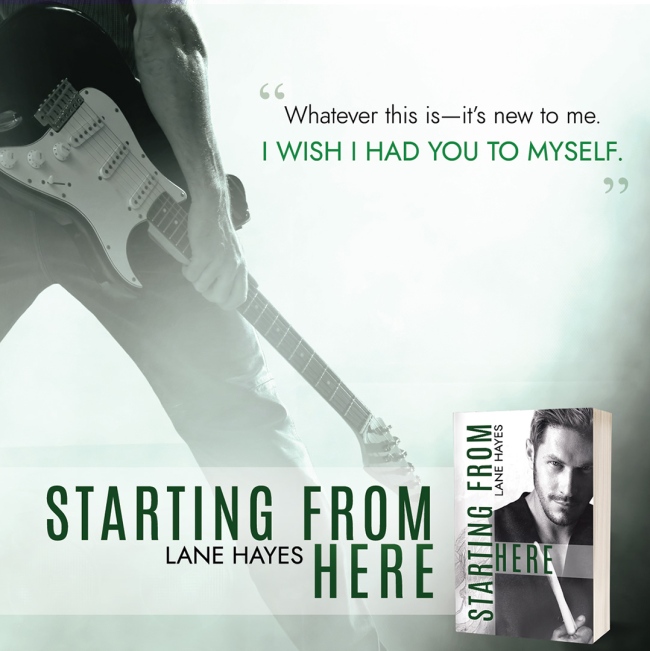 The sound of cheerful squealing rang in the background before she hung up. I stared into space for a minute or two, feeling very…alone. I didn’t want to slip into teenage levels of self-pity. There was really nothing lamer than a privileged grown-ass adult whining about mommy issues. I flipped through television channels, pausing on a special about great white sharks. Then I tossed the controller aside and picked up my cell again.

Would you ever swim with sharks?

My phone buzzed immediately. I smiled when Tegan’s name lit the screen. Are you high?

I wish. Swimming with sharks is a thing. People get in cages and film themselves being surrounded by predators…for fun.

What are you watching?

National Geographic. I was hoping for a sex in the wild segment, but I got sharks instead.

I grinned. Nope. I don’t think I’m ready for that.

I stared at the screen for a moment. I typed and erased two or three thank-yous that seemed a little too effusive. I didn’t want to come across as too excited or too grateful and somehow clingy, so I gave up and pressed Call.

“Are you really fucking calling me?”

“You’re welcome. But it’s midnight, and I hate talking on the phone, so good ni—”

I stared at the TV unseeing. “Nothing. I just…I’m keyed up and I need someone to talk to. What was your first release like? I know Zero’s record is still doing well. But…what was like in the beginning? How’d you feel?”

“You want the truth?”

“No, it’s just life. Nothing ever happens as fast as you want it to. You’ve got to be patient and keep doing your thing,” he advised. “We came home from our summer tour thinking we made it. What didn’t turn into superstars, but we made progress. And every day it gets better. But who knows what will happen? Maybe you’ll wake up at number one. Just stay positive and…stop torturing yourself.”

I smiled when Tegan’s uplifting advice gave way to exasperation. It was cute.

“It’s what I do. I excel at the art of self-sabotage. Ask my mom. If I bomb, you can be sure she’ll be the first one to say ‘I told you so.’ She’ll choose her words carefully, though. She’ll be kind-ish before she gently suggests that it’s time to throw in the towel and join the family firm. Fuck my life.”

“But it’s your life. The honor of making mistakes or kicking ass is all yours. You wrote those songs to be heard. Not everyone will love what you do, but plenty of people will. You just gotta be right in your own head. Ask yourself if you gave your best. Did you?”

“You’ll do just fine, then. If you sell a million copies, great. If not, you’ll still learn something.”

“Thanks. I needed that,” I said softly.

“I’m an almost rock star, and it’s midnight. My night is just beginning,” I lied, stifling a yawn.

“You’re a freak. Get your computer and jack off. You’ll feel better, and you’ll sleep better,” he advised sagely.

“Thanks, Dr. Monroe. I’ll report back in the morning.”

“Are you really sharing a spank-bank story?”

So…I don’t think this can be read as a standalone. There is too much band history, too much history between characters, just too much story arc, I think. And I have to say, a couple of these characters surprised me.

Tegan for one. The minute details of the previous books escape me, but he pissed me off a bit at the beginning of this book. I thought he was being overly crappy to Declan. I could tell Declan honestly had feelings for Tegan…whether they were still of the romantic variety or just him missing his childhood best friend and Tegan absolutely treated him like dirt. He eventually stopped and admitted that he probably didn’t know him as well as he thought but it took a while for him to win me over.

Declan is portrayed as the nemesis in the previous books, but I really liked him in this one. He was manipulated and hurt by people he trusted. There was an absolute lack of and miscommunication on his part (of which I’m not a fan) but when he finally admitted how he felt about Tegan and they stripped away the BS, they were great together.

Justin is the other character that pissed me off. He was absolutely awful in this book and I don’t remember him being quite this bad. I really needed him to just…go away.

The epilogue was good but too quick for my liking, especially since it took until almost the end for these two to finally get past their relationship struggles. I’m hoping we’ll see more of them together in the future.

We meet a few new characters in the book – Declan’s band members – which could lead to future books in this series. I’d be interested in the story of a couple of them for sure.

Lane Hayes loves a good romance! An avid reader from an early age, she has always been drawn to well-told love story with beautifully written characters. Her debut novel was a 2013 Rainbow Award finalist and subsequent books have received Honorable Mentions, and were winners in the 2016, 2017, and 2018-2019 Rainbow Awards. She loves red wine, chocolate and travel (in no particular order). Lane lives in Southern California with her amazing husband in a not quite empty nest.