The guitarist and the geek…

What can I say? I’m a man of many tastes. I know what I like, and I’m not afraid to go for it. And I like the adorable geek from the bar. A lot. He’s smart and sassy…and he doesn’t seem to know or care that I’m in a hot up-and-coming band. However, I just found out he’s the new intern at Scratch Records. Uh-oh, this could get tricky.

Confession…I’ve flubbed my mission. My quest is to research cool things and interesting people before I start my job as aerospace analyst—not fall for a rock star. My internship won’t last long if I can’t control this infatuation. Bobby J might look like a bear, but he’s fun and sweet and…oh boy, I think I’m in over my head. But maybe that’s not such a bad thing. After all, you’ve got to start somewhere.

Starting From Somewhere is a MM, bisexual romance with some rock and roll and a little nerdiness! Each book in the Starting From series can be read as a stand-alone. 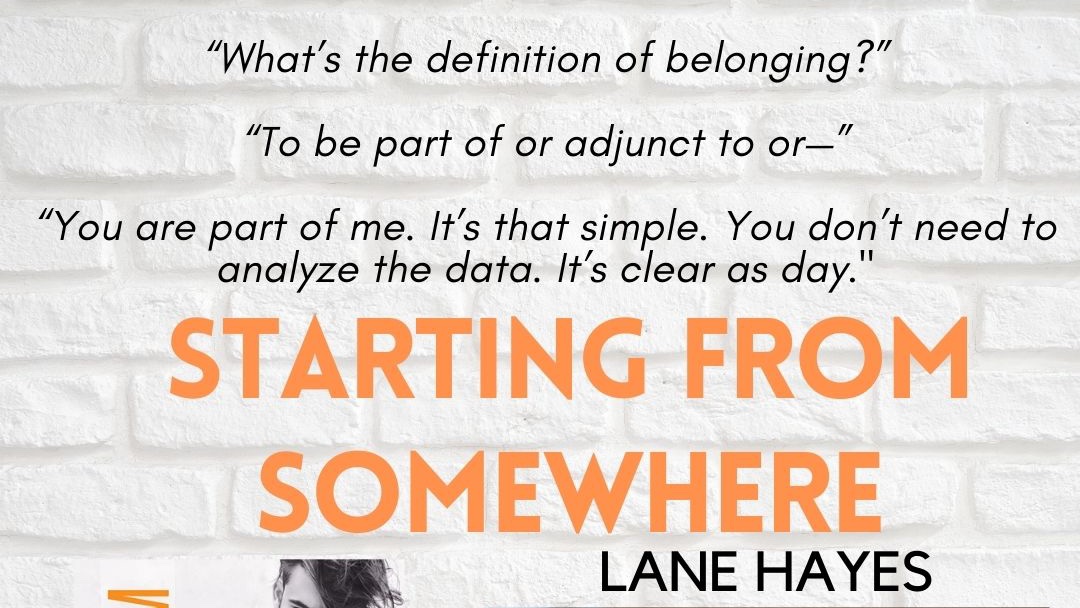 Cody nodded as he pulled out his cell and typed a few notes. “Got it. Thank you.”

“You’re welcome. Give me one shot before I go.” I motioned for him to start talking.

“A flirting shot. Okay.” He licked his lips nervously, then shook his head. “I can’t. Everything I’m thinking is…rude.”

I barked a quick laugh. “You have my complete and undivided attention. Bring it on.”

“Um…your jeans look tight. I can’t wait for you to stand up so I can see your ass. But I’d love to see your ass out of them too.”

I bit back a grin. “Okay. That was direct and kinda hot, but do not under any circumstances try that with anyone else on planet Earth.”

“A tad.” I squeezed his shoulder as I stood. “Keep practicing. It was nice to meet you, Cody.”

“You too. I’ll walk out with you. I’ve done enough research tonight.”

I nodded, then led the way to the exit, holding the door open for him. I stepped outside and gazed up at the fast-moving clouds drifting over the half-moon before turning toward my new acquaintance. Cody pulled his keys from his pocket and smiled.

“Over there.” He gestured at the black Mini Cooper at the far end of the lot mostly hidden in shadows.

My chivalrous side kicked in out of the blue. “I’ll walk you to your car. I’m heading that way.”

Cody beamed at me. “Thank you. Are you working early tomorrow?”

“I’m making polite conversation. No flirtation whatsoever. Although I was mulling over our earlier discussion and realized you’re guilty of double standards.”

“Earlier you said…and I quote, ‘I’d do you.’ You added something about doing ‘it’ over a bar, a table, etcetera. Ring any bells?” He pointed his key fob at his car and gave a satisfied nod when it beeped on cue.

I squinted warily. “Yeah, but—”

“When I told you I wanted to see your posterior in your Levi’s, I was somehow out of line. The logic confuses me. Why should you be able to say what you’re thinking, and I can’t?” He came to a stop at the driver’s side of his car and crossed his arms, silently issuing a challenge of some kind.

“Now that you mention it, I suppose that does seem unfair.” I scratched my beard thoughtfully, then turned around to show off my denim-clad ass. “<em>Ta-da</em>! I present my posterior.”

“Glad you approve.” I pivoted to face him and fumbled with my belt. “I guess I could show you the whole kit and caboodle…or caboose.”

I raised my hands in surrender. “If you say so.”

He pursed his lips, looking uncomfortable as hell. To his credit, he didn’t back down. “You heard me.”

The husky note in his voice zipped through my veins like a secret elixir. The sudden onslaught of need and desire was a powerful combo. I stepped closer, wedging myself between him and the Prius parked next to his car. I was at least four inches taller than Cody and much bigger. I could squish him like a bug. I wouldn’t. I wasn’t that kind of guy, but he didn’t know that. He should be careful around men like me.

“Because I might never meet anyone like you again. If I do, I might not be confident, brave, or sincere enough to tell him what I want. I feel like this might be a chance I should take. I understand if you say no. I’m not your type. I get it. I’m not sure why you talked to me at all tonight. Or why—”

I curled my fingers around the back of his neck and sealed my lips to his.

So what happened to my gentlemanly resolve to not corrupt a nerdy, adorable dude barking up the wrong tree for some sexy action? I had no fucking clue.

This is a great sweet, quick read. I’ve read the short freebies with Declan and Tegan so there was some foreshadowing for these two in those books. This was not surprising or earthshattering. The story was a bit predictable, but the characters were not.

Bobby J was full of surprises…his family, his education, his brains, his personality quirks. Cody was occasionally a fox in sheep’s clothing…he could turn bossy on a dime if the situation called for it. While these two initially appeared as opposites they weren’t really. And they’re kind of perfect for each other.

I’m really intrigued by Johnny and am hoping his story is next!

Lane Hayes loves a good romance! An avid reader from an early age, she has always been drawn to well-told love story with beautifully written characters. Her debut novel was a 2013 Rainbow Award finalist and subsequent books have received Honorable Mentions, and were winners in the 2016, 2017, and 2018-2019 Rainbow Awards. She loves red wine, chocolate and travel (in no particular order). Lane lives in Southern California with her amazing husband in a not quite empty nest.