Heisman winner. Member of the National Championship team. NFL Rookie of the Year. Quarterback Colin O’Connor knows he’s become the ultimate romance novel cliché: all the success he’s ever dreamed of but nobody to share it with. Too bad it’s not as simple as asking out the next girl who intrigues him – because the next girl to intrigue him probably won’t be a girl at all.

Unexpectedly, the solution comes in one neat package: Nick Wheeler, lead journalist for a leading sports and pop culture blog. Hired by Colin’s team, Nick comes to Miami to shine a spotlight on the NFL’s most private quarterback.

The heat in Miami rises when Nick discovers that Colin is nothing like the hollow personality he pretends to be in interviews and he’s even hotter in person than on his Sports Illustrated cover. Nick knows this is the story of his career, and after spending his teenage years as a bullied, closeted teen, it hits very close to home. What he needs is to help Colin share his story while keeping their growing relationship from boiling over in the press, but what he wants is to tell the world.

Nick went through the cupboards one at a time, finding an obscene amount of protein shakes and powder, and a lot of basic staples that proved Colin probably did know how to cook. That hadn’t been an act, though he was beginning to wonder how much of the Colin O’Connor he’d seen wasn’t. Probably almost none of it, and that was terrifying.

He had just poured milk into his Cheerios when Colin jogged up to the patio and into the house, wearing a pair of loose-fitting athletic shorts, a thin layer of sweat, and nothing else.

Nick choked on air. So much for his peaceful breakfast.

“Good morning,” Colin said with that annoying smile. All innocence with just the tiniest edge of something more. Like he knew exactly what he was doing and how effective it was.

“Morning,” Nick mumbled into his cereal.

“I was going to wake you up for my jog, well our jog, but you seemed to be sleeping pretty soundly.”

Nick tried not to think about what that sort of picture that made. Or that Colin had looked into his room and had seen him sleeping.

“Do you jog every morning?” Nick asked, even though he already knew the answer. Anything to abort that line of thinking.

“Usually about ten miles or so. Went fourteen this morning, felt really good.” Colin reached for his forgotten t-shirt hanging over a barstool and shrugged it on. It stuck to his skin in sweaty patches, which shouldn’t have been attractive but apparently, Colin O’Connor defied logic.

“Tomorrow you want to join?” Colin asked like he hadn’t heard as he grabbed a water bottle out of the fridge.

“Not for a fourteen mile jog,” Nick said.

“Not even for ten?” Colin wheedled.

“Not even for ten. You could probably convince me to do about half that.” 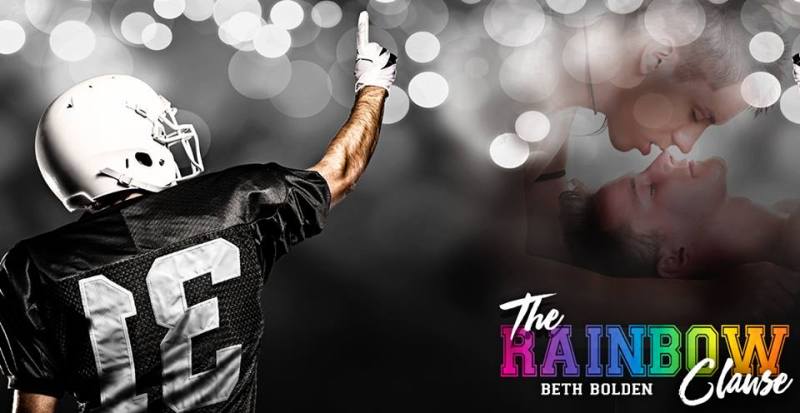 I’m a huge sports fan so I love reading about athletes! This is my first book by Ms. Bolden and while I liked it alot, the author’s writing style took some getting used to. Part of that, as it turns out, is because Jemma and Gabe were introduced in their own story. That may explain why some of the assumptions were made about the characters and were confusing if you hadn’t read their story. There is a pretty big thing that happens with Nick that is kind of glossed over in this story so I’m guessing it started in that book. It’s possible if you’ve read their book, this one won’t be as confusing.

Nick and Colin were really great together. They balanced each other well, being strong for each other when needed. Even when they were dancing around their attraction, their feelings for each other were obvious. They were surprisingly shy about the attraction which made it all the more endearing.

Colin has been hiding and finally had enough. While the story does include some romance between them, the theme is centered on staging his coming out.

I had a couple of issues with the book. In the synopsis, it’s mentioned that Nick was bullied in his teenage years which has shaped his outlook on Colin’s coming out. This was never once mentioned in the story. He continuously told Colin to expect the worst from folks but never mentioned why. That was a big part of Nick’s history, shaping his attitude now that was completely left out of the story.

Additionally, I didn’t like how hung up on Jemma Colin was…even 40% into the book and he’s still thinking about her, bitter that she ‘friend-zoned’ him. He claims to be over it, but his thoughts don’t support that.

Even with the holes, I liked the story and Nick and Colin as a couple.

Beth Bolden lives in Portland, Oregon with her supportive husband and their beloved cat. She wholly believes in Keeping Portland Weird, but wishes she didn’t have to make the yearly pilgrimage up to Seattle to watch her Boston Red Sox play baseball. She’s a fan of fandoms, and spends too much of her free time on tumblr.

Beth has been writing practically since she learned the alphabet. Unfortunately, her first foray into novel writing, titled Big Bear with Sparkly Earrings, wasn’t a bestseller, but hope springs eternal. She’s published two novels, The Lucky Charm and Getting Lucky, and a short story, Eye of the Storm. Her next novel, Summer Attractions, will be released in August 2016.