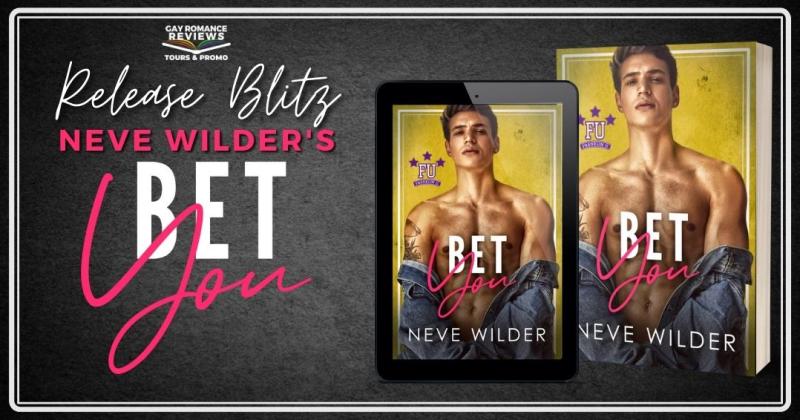 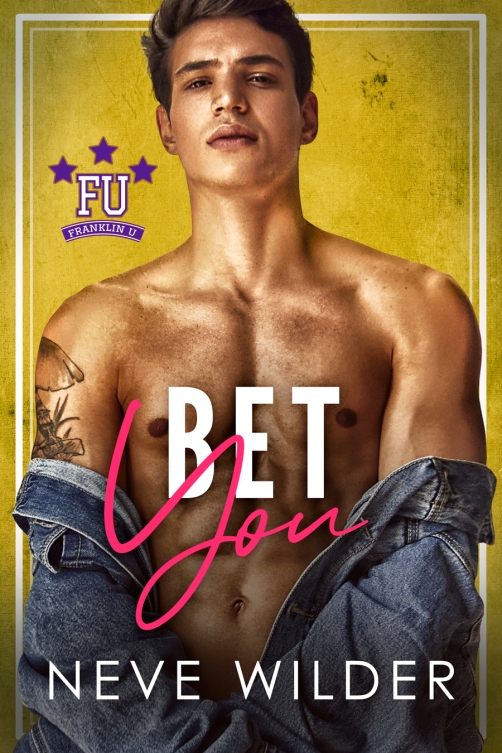 Whose brilliant idea was it to build university housing next to one of Franklin U’s most notorious party frats?

I’m a real student—the kind who actually came to college to learn, not some dumb frat bro who sees Franklin U as a four-year challenge to consume the most booze and throw out the best pick-up line.

Their all-hours lifestyle is driving me crazy. Not to mention, the jerks keep taking my assigned parking spot.

But the worst offender might be Cory Ingram. Sure, he has a smile that could melt a polar ice cap, but no way will I ever be one of his minions. I’m pretty sure I made that clear when I blew my top at him. So I have no idea why he’s suddenly everywhere around me, turning on the charm like I might actually fall for it.

From the first day I set foot on Franklin U’s campus, everything has been golden. I have a ton of friends, endless parties to be the life of, and whoever I want in my bed on any given night. Sure, I’m a shameless party boy, but I’m not a jerk. Ask anyone. Seriously.

Even the crotchety old groundskeeper waves and smiles at me when I pass.

Then there’s Spencer Crowe. I’ve never seen a guy’s face get so red over a parking spot. Even when I try to make it right, he proceeds to give me the tongue-lashing of a lifetime—which is about the moment I notice that, in addition to being irrationally irate, he’s also crazy hot.

Bet you I can. Damn, this dude is fired up. And while I hear the words coming out of his mouth, it’s the visuals that strike me. Dark brown hair swept back from his forehead in a way that catches the sunlight in threads of warm gold. His eyes are a crystalline blue and what I’d consider penetrating if they weren’t filled with so much fury that I’m convinced he’s trying to laser me to ash on the spot. And a mouth that, well, if it wasn’t currently spewing venom at me, would leave me curious about how it’d feel wrapped around my cock.

How have I not noticed this guy before?

Shit, have I slept with him?

Maybe that’s why he’s so pissed over a parking spot? Who the hell gets this butthurt over a parking spot without some background motivation? I mean, I’m always up-front with my hookups that I am in no way relationship material, but that doesn’t mean feelings don’t get hurt sometimes. Maybe this guy is a ghost from hookups past?

“Have I slept with you?” I blurt, interrupting him while he’s saying something again about a dumpster on Lee Street.

His jaw snaps shut, then opens again, bewilderment wrinkling his forehead. “What? Of course not,” he growls as if I’ve mortally offended him by the suggestion, which in turn kinda offends me.

Look, my body count is pretty high, but like I said, I’m always up-front with my partners, always get consent, and am dedicated to their pleasure as much as mine. I mean, Jesus, I once went down on a girl for two hours because she’d never had an orgasm from oral before, and it took us that long to figure out what combination of lips, tongue, and fingers was the winning ticket. But by god, we fucking found it. And then celebrated after with a two-hour nap before she blew me a kiss as she left. I never heard from her again, but I like to think she’s out and about these days tugging the roots of guys’ hair as they bring her to multiple orgasms.

God, he’s still going. I zero in on his mouth, the plump Cupid’s bow and the thinner lower lip—which gives him a stern look that’s really working for me. I shake my head, trying to focus on the words coming from those sexy lips.

“…not if you were the last man alive.”

Okay, so he’s gay. Or bi. I squint at him, still confused. “I’m sorry, but I need to ask again: Is this amount of aggression really warranted over a parking space?” When he purses his lips, I can’t help it—I have to fight back a grin. It’s just… he’s so fucking indignant. “Look, I’ve said I’m sorry about your space, and I’m moving the car now.”

“Which would only help me if I could time travel back to an hour ago to before you parked in the spot.”

“How about I drive you to your car?” I figure that’s a considerate offer and the best olive branch to offer that I can think of at the moment.

He blinks in surprise before his mouth pulls into another scowl. “No, thanks. I’ll walk.” He stalks past me and starts down the street. 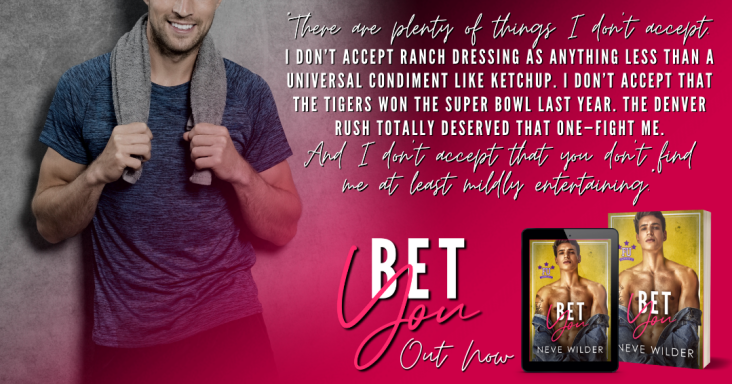 Bet You by Neve Wilder
My rating: 3 of 5 stars

As is normal for Ms. Wilder, there are some steamy scenes in this one. But the story was slow for me and very predictable.

Spencer and Cory work together I suppose. They have similar-ish interests and learn to like doing things together. Spencer is wound tight, and Cory is a fun-loving, life-of-the-party guy.

I won’t say much about the plot…the predictability made reading the book easy but there is nothing new here. Everything happens exactly as you’d expect, and things just fall into place for these two.

On to the next one… 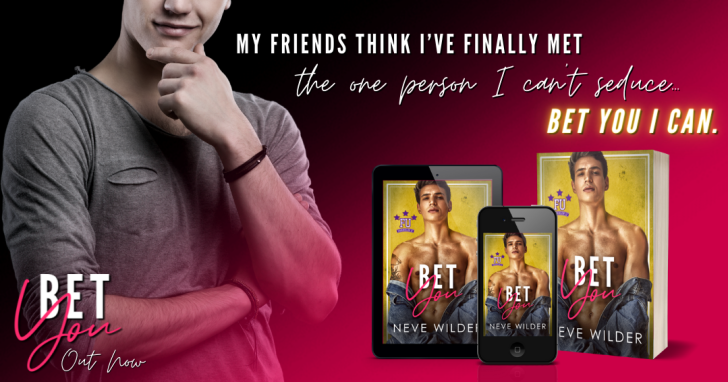 To celebrate the release of Bet You, Neve is giving away an eBook of the Winner’s choice from her backlist!

Enter the Rafflecopter giveaway for your chance to win! 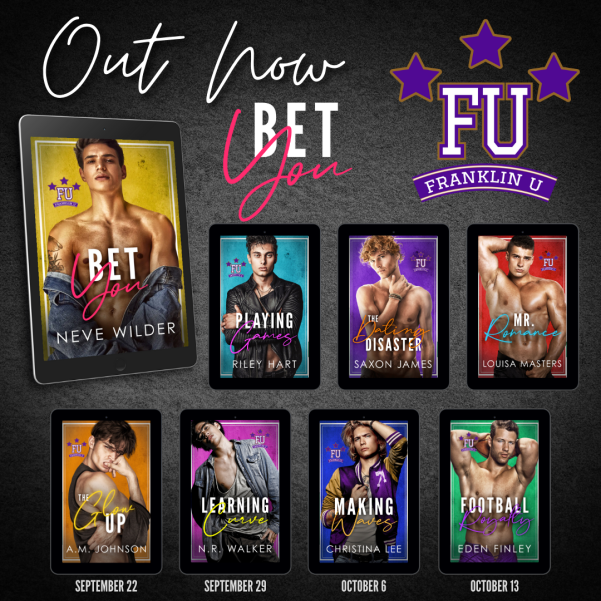 Neve Wilder reads promiscuously, across multiple genres, but her favorite stories always contain an element of romance. Incidentally, this is also what she likes to write. Slow-burners with delicious tension? Yes. Whiplash-inducing page-turners, also yes. Down and dirty scorchers? Yes. And every flavor in between.

She believes David Bowie was the sexiest musician to ever live, and she’s always game to nerd out on anything from music to writing.

And finally, she believes that love conquers all. Except the heat index in July. Nothing can conquer that bastard.